Signed, Sealed, NOT Delivered: Has President Trump been Impeached? 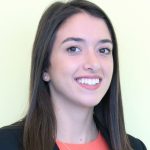 This left many wondering, if the articles of impeachment are not delivered to the Senate, has President Donald Trump truly been impeached? 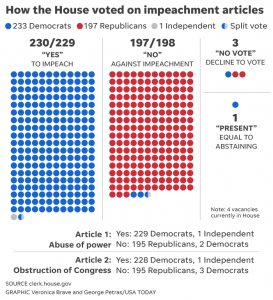 Following a lengthy impeachment process, the President faces impeachment on two counts: abuse of power and obstruction of Congress. Both articles passed, by a vote of 230:197:1 and 229:198:1 respectively. Impeachment votes fell largely along party lines with zero Republican members of the House voting “yes” to either article of impeachment against President Trump.

After articles of impeachment are passed, they are sent to the Senate for trial. The Constitution grants the Senate the “sole Power to try all Impeachments” (emphasis added). The impeached official retains his/her position until a trial is held. The Senate must then have a 2/3 concurrence of the members present. From there, the Senate has two available penalties (should penalties be chosen). Either remove the individual from office or disqualify the individual from serving in the federal government in the future. The Constitution outlines that the President “shall be removed from Office on Impeachment for, and Conviction of, Treason, Bribery, or other high Crimes and Misdemeanors.” Historically, two Presidents have been impeached: Johnson (1868) and Clinton (1998). Notably, Nixon resigned from office during impeachment investigations (1974). President Donald Trump would be the third impeached President in United States history.

Legal experts disagree over the impact of the delayed delivery of the articles of impeachment. Legal expert Noah Feldman (called by Democrats to testify before the House Judiciary Committee) asserts that “if the House does not communicate its impeachment to the Senate, it hasn’t actually impeached the president.” There have since been whispers that the White House is considering arguing there has not been an official impeachment due to the undelivered articles.

This interpretation has been rejected by other legal experts including Jonathan Turley in an article titled I Was Against Trump’s Impeachment. But Let’s Not Pretend That It Didn’t Happen. Textually, Turley argues that the House’s sole power of impeachment is not dependent on the Senate’s power to try the impeachment. Put more simply, the House (and the House alone) impeaches officials regardless of the subsequent trial that the Senate holds. Further, Turley highlights the practical implications of such a theory. If impeachment was contingent upon delivery to the Senate, there would be greater opportunity for “mischief” as Turley states. The Senate could foreseeably go out of session to inhibit the delivery of the articles—preventing impeachment.

Two centuries ago, the Supreme Court determined that a signed—but not delivered—commission was enforceable. At the turn of the 19th century, President Adams lost the presidential election to President Jefferson. In the final days of Adams’s presidential term, he appointed several individuals to government positions. While the U.S. Senate confirmed Adams’s appointments before he left office, a few of the new commissions had yet to be delivered. These commissions were signed and sealed, but not delivered. The Supreme Court found that the signature and seal completed the commission and that “transmission of the commission is a practice directed by convenience, but not by law.” The act of signing and sealing the document demonstrated an “open, unequal act” indicating that “the time for deliberation has passed.” (Ultimately, the Supreme Court found that it did not have jurisdiction and could not enforce delivery).

Recognizing that the present situation is distinct from Marbury v. Madison, Justice Marshall’s ruling could be similarly applied today. When the House of Representatives passed both articles of impeachment, it had been decided by “an open, unequivocal act.” Applying Marbury v. Madison, the House need not deliver the article—it has been signed and sealed.

Signed, sealed, but not delivered. The debate continues over whether President Donald Trump has technically been impeached. The House of Representatives is set to reconvene on January 7, 2020. Many anticipate the documents will be sent to the Senate soon after the House has reconvened from holiday recess. Delivery of the articles of impeachment cannot be delayed indefinitely, and once sent President Donald Trump is indisputably impeached.

Letter from President Donald J. Trump to the Speaker of the House of Representatives, (Dec. 17, 2019).