The word “resurrect” comes from the Latin word resurger, meaning “to rise again.” To resurrect is to both acknowledge defeat and to declare hope. And while resurrecting what has fallen is no simple task, Syracuse Law alumnus Marguerette N. Hosbach (’80) has dedicated her legal career to just that. 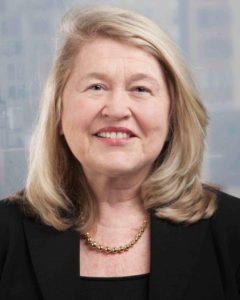 Twenty-five years ago, Marg started at Ernst & Young in New York City.  She was a young litigation associate and a graduate of the College of Law, where she served as a Syracuse Law Review Notes & Comments Editor.  But her path to EY was certainly not a straight line . . .

Marg graduated from Vassar College in Poughkeepsie, New York, in 1973, where she majored in literature.  At the time, she said there were two options for women with that major.  “Back then, you either worked in advertising or publishing, or you went right to graduate school.”

Marg wanted the practical experience first, so she ventured out into the Big Apple and landed a media research analyst position in a large advertising agency.  Much of her time revolved around supporting the media buyers.  And, while Marg enjoyed the work, she wanted to broaden her knowledge of business, in general, and marketing, in particular.  So, in 1974, she entered Columbia’s MBA program, where she paired academic rigor with participation in internships at cultural and business institutions.

Upon graduating from the MBA program, Marg returned to the advertising agency to take on a new role as an assistant account executive.  In that capacity, Marg assisted in developing and implementing television and print advertising campaigns for large consumer companies such as Procter & Gamble (i.e., Crest toothpaste).  Throughout this time, Marg also became familiar with “the law” as it applied to advertising.  Specifically, Marg worked closely with the legal departments at the major networks, vetting advertising copies.  The more Marg dealt with the legal departments, the more interested she became in the “legal side” of advertising and marketing.  So, after a few years with the agency, Marg decided to take on a new challenge:  law school.

She entered Syracuse University College of Law in the fall of 1977, finding herself among a wonderful group of peers.  “The common denominators I saw in all of those people who wanted to become attorneys were their competence, their varied interests, and their drive.”

Beyond the students, however, were the professors who positively impacted her – an impact, she says, they likely do not know.  One professor she recalls was Professor Gary Kelder, a criminal law expert who still teaches at the College of Law today.  “He was so excited about teaching that he’d be jumping up and down!  That enthusiasm is contagious.  His class really impacted me in terms of deciding to take the position I did upon graduation.”

When she arrived at the DA’s Office, Marg was placed in the Appeals Bureau. There, she had the opportunity to participate in the preparation of senior attorneys in connection with two United States Supreme Court cases. She credits this assignment to her time on Syracuse Law Review.  “Certainly, Law Review helped me get a job right out of law school.  I think that that is underscored by the fact that my first assignment out of law school was to the Appeals Bureau of the Manhattan DA’s Office.”

After two and a half years in the Appeals Bureau, Marg joined one of the Trial Bureaus to develop her litigation skills.  She tried about 17 cases, until her next exciting opportunity came along just a few years later: the private sector.

“I started working at Cahill Gordon & Reindel LLP in 1985.  Having been on Law Review is one of, I think, the very important reasons why they hired me, especially since they told me that they had never hired anyone out of the public sector before.”  At Cahill, Marg was involved with litigation on behalf of investment banks and large accounting firms.  There, she got exposure to litigation in both civil and regulatory areas.  And after nearly five years of practice at Cahill, a new venture presented itself in the form of Ernst & Young—and Marg grabbed at the opportunity.

During Marg’s first years at EY, she handled accounting malpractice litigation.  However, after a few years with EY, the Enron scandal hit, and there was a surge in the number of large companies filing bankruptcy and hoping to emerge as healthier companies.  Some of those large companies were clients of EY.

Marg started hearing from the restructuring professionals at EY—you have an MBA, you are a litigator—and before she knew it, Marg was asked to develop a practice whereby she could support EY professionals who were providing services to distressed clients.  “I’ve now been advising EY partners who provide services to distressed companies for the past 20 years, and throughout, I’ve seen many waves of industry sectors using bankruptcy to rebuild and emerge with healthier financial structures.  For me, it began with a few questions re the Maidenform bankruptcy and questions over the next few years in connection with numerous retail clients. Enron filed in 2001, then a few years later the bursting of the tech bubble, more recently coal, oil, and energy, and now a new wave of retail filings.”  From industry to industry, Marg has played a role in helping companies restructure and emerge, and she’s done it all through the power of the law.

One of her favorite cases of all?  The City of Detroit.  EY was a financial restructuring advisor to the City of Detroit during its Chapter 9 proceeding (municipalities file Chapter 9, rather than Chapter 11), and Marg helped support the EY team in the provision of EY services.  “I only made a tiny contribution, but Detroit’s restructuring was—without question—crucial to the City thriving.  It was so great stepping back and seeing attorneys making this kind of positive difference for a great American city.  I still have a cover from the NY Times re Detroit posted to my office bulletin board.”

She said the sort of work where a company goes into bankruptcy—broken and defeated—and then can emerge healthy and ready to contribute positively to the American economy is the kind of work that makes her proud.  “That kind of work saves jobs, helps industries thrive, and adds positively to the economy, and I’m proud to be a part of that team.”

Marg’s resume runs the gamut of legal practice, and she wouldn’t have had it any other way.  “My parents used to tell me, ‘You really want to make certain you enjoy what you do because you’ll spend so much time doing it.’ I searched for what was interesting to me at the time, what would be of interest to me in the future, and what would also allow me the opportunity to feel like I was doing something substantive and meaningful.”

I think we all can agree that, from criminal prosecution to corporate insolvency, Marg has done just that.

This story was written by Legal Pulse Editor Samantha Pallini and is the first installment of Syracuse Law Review’s new monthly feature, “Alum of the Month.” Stay tuned for next month’s feature on another noteworthy Syracuse Law Review alumnus.