As a theatre lover, Rebeca Sánchez-Roig never imagined attending law school and opening her own firm. An immigrant from Cuba, Rebeca and her family moved around frequently. From Florida to Puerto Rico back to Florida and eventually the mid-west. Her father was a lawyer in Cuba but wanted a different career path: to become a professor. Being immigrants, both her mother and father had to restart their higher education and move where the jobs were. Rebeca and her family moved all over the mid-west from Missouri, to Iowa, Tennessee, and Illinois; by the time Rebeca graduated high school, she had attended 10 different schools.

Growing up in the mid-west, Rebeca and her siblings were one of the only 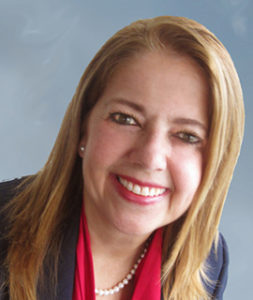 children in their schools that spoke two different language. There was a culture shock, but Rebeca was proud of who she was and where she came from. Gifted by her parents with a love of reading and learning, she immersed herself in books, movies, and learning. Her father always told her that the communist could take everything away from a person, except their education. They could never take away knowledge. Higher education, including a masters and doctorate, were not options in Rebeca’s family; these were requirements. Education was key to a successful future in life. As refugees, Rebeca’s parents could not afford to pay for their children’s college education. But that did not deter Rebeca and her siblings from getting a higher education

Rebeca started at Miami Dade Community College, where she received her Associate’s degree. She then attended Florida Atlantic University, where she made life-long friends and pursued her love of theatre. With a major in lighting design and theatre technology, Rebeca graduated with a Bachelor’s in Fine Arts; and also received her Master’s in Fine Arts from the university.

Her desire to work in the theatre took her to the Florida Grand Opera, the Cincinnati Opera, and Olympia Theatre. The idea of law school was not even a thought in Rebeca’s mind until one day a stage manager for English jazz and pop singer and actor Cleo Laine, met Rebeca, and changed her life.

While working as part of the stage crews for these theatres, Rebeca was the only person with an advanced degree. When it came to reading contracts, the theatre and crew turned to Rebeca. Having higher education also gave her a leadership role, and she was quickly identified as the go-to person for reading contracts and keeping everyone informed of the terms. When Cleo Laine was set to perform, her stage manager introduced himself to Rebeca. Seeing how she was the person everyone turned to for contracts, he asked if she had ever given law school a thought. He told her he was an attorney and worked in entertainment. Rebeca thought it was interesting but did not give it any consideration until that summer.

That summer, while working at a summer camp for performers in the Catskills, the thought of law school continued to run through her mind. By the end of that summer, she knew that she wanted to pursue a career in law.

Choosing a law school was not an easy task. Here she was, a theatre major with no background in the law whatsoever. Who would want such a person in law school! Rebeca applied to as many schools as she could afford, and to her surprise, she was accepted into almost all of them.

Syracuse stood out among the acceptances. She had good friends in Syracuse, and wanted to be as far away from warm weather as possible so she could focus on her studies. Not long after, Rebeca accepted Syracuse’s admission offer, and moved from sunny Florida to Syracuse.

Entering law school was a shocking experience for Rebeca; she had absolutely no idea what to expect. She had spoken with a friend who was in law school—but nothing prepared her for the actual law school experience.

Rebeca ended up taking a summer program a few weeks prior to the start of classes. Looking back, she is happy she attended the summer course because it allowed her to get a leg up on her understanding of what was to be expected in law school.

In her 3L year, she learned that a friend told was pursuing a career in immigration law, which surprised her because Rebeca had no idea that this area of law existed. Being an immigrant herself, she had filed most of her own paperwork, and had no clue there was a whole legal aspect behind it.

While applying to jobs, Rebeca weighed her options and decided to return to Florida where most of her family lived. She accepted the offer from Morgan, Lewis & Bockius and worked there for four years as a corporate lawyer handling financial matters. Rebeca then moved to another large firm, continued work as a corporate lawyer, and added real estate attorney to her resume.

As much as she enjoyed private practice, she wished to spend more time with her family and three–year old son. She was working 12 to 15-hour days, and though she was fortunate to see her son during the day, she wanted to spend more time with him. A friend, who worked at the federal public defender’s office, told Rebeca that the Immigration and Naturalization Service was hiring. Knowing nothing of immigration law, Rebeca still applied and received an offer.

At the new job, she was given four days of training, and on the fifth she was in court defending the government on immigration issues. Her years of private practice and Law Review experience, however, helped her thrive. Within a year, she was promoted to Deputy Chief Counsel, a supervisory position, and created a training program which gave new attorneys at the office more legal training and better preparation for what was to come.

After 17 years of federal immigration prosecution work for three different administrations, Rebeca knew it was time to move on. She resigned from her position, and opened a law firm.

For Rebeca, the law is not an “I” job—it’s about cooperation, working with others, and learning every day. She firmly believes that success is in sharing knowledge, and helping others along the way. With these words in mind, Rebeca has become the successful attorney she is today.

Syracuse Law Review looks forward to recognizing Rebeca and her many accomplishments at the Law Review Banquet on April 18, 2019.