Darren Miller, a partner at Nixon Peabody, was not the traditional law student. Yet, his path from classroom to conference room prepared him to be a successful and well-versed attorney.

Born and raised in Scotland, Darren suffered a tragedy at a young age when he lost his father in the Piper Alpha Oil Platform Disaster, and through the ensuing Public Inquiry, was introduced to the law. Family and friends alike told him he’d make a great lawyer someday, and Darren was sure he’d prove them right. 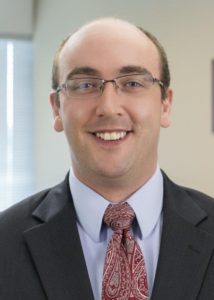 Darren first came to the United States at the age of 16 through an exchange student program, spending his senior year of high school in upstate New York, where he met his eventual wife, Aedria. Deciding to stay in the U.S. for good, he enrolled at Binghamton University, where he majored in political science and gained valuable work experience in the legal department of a life insurance company.

Upon graduation in 2004, Darren prepared for his legal education at Syracuse University College of Law, where he would join Syracuse Law Review for Volumes 56 and 57. His Note, inspired by his journey toward American citizenship, was entitled “Terminating the ‘Just Not American Enough’ Idea: Saying ‘Hasta La Vista’ to the Natural-Born-Citizen Requirement of Presidential Eligibility.” Darren’s Note was selected as the number one Note in 2006 and was published in Volume 57.

During his 3L year, Darren served as an Associate Notes Editor for Law Review, helping 2Ls with their Notes and research processes. Darren credits this experience with helping him to develop an unbridled attention to detail, to realize the importance of networking, and to appreciate how valuable research and writing are in the legal field.

“Attention to detail is crucial as a lawyer,” Darren said. “The placement of a comma or the wording you choose can mean the difference between a positive or negative result for your clients.”

While in law school, Darren tapped into a variety of his legal interests, but he always kept an open mind. He knew he loved the law, but he wasn’t quite sure what area of law would be the best fit, with the exception of transactional versus litigation. That, he jokes, he came to decide between very quickly.

“In my first year, we had oral arguments in our Legal Research and Writing classes,” he said. “I was paired against one of my good friends, and she was first in the class at the time. She bested my argument on all counts and handed me a lesson that I wouldn’t forget! I knew, at that moment, I was never going to be one of the courtroom lawyers I saw on television!”

That valuable lesson steered Darren to accept internships and experiences that would ultimately shape his career path and lead him to where he is today.

His first summer, he worked with a small firm in Binghamton, New York, where he dabbled in criminal law and gained plenty of writing experience. The second summer, he found himself at Nixon Peabody in Rochester, New York. It was there that Darren began what has become an exciting and fulfilling career, receiving a job offer from Nixon Peabody at the close of the summer.

After accepting the offer, it became a question of where to place Darren in the firm, as the summer program utilized a rotating-department system.

“They said, ‘What do you think about real estate?’ To be honest, I’d never really thought about it before!” Darren said. “That’s where I started, though, and I’ve really enjoyed building my career with a fantastic group of real estate lawyers in Nixon’s Rochester office and across the country. I didn’t begin to focus on construction law until I was a second- or third-year lawyer, when a couple of departures from the firm opened up an opportunity to learn a niche area of the law. I’ve been really fortunate to learn from a fantastic mentor who really invested a lot of time to teach me this field.”

Darren said that although his practice area choice may appear “happenstance,” a life of “happenstance” prepared him well for that moment—from being an exchange student, to meeting his wife and moving to the U.S. permanently, to taking the summer associate position at Nixon Peabody.

“I think the take home lesson is that being a lawyer always changes,” he said. “You have to be willing to learn something new, to modify your plan. Take the recent changes to the tax code as an example. Many of the changes proposed would have fundamentally changed the nature of tax practice for a number of lawyers at Nixon and elsewhere. Changing circumstances are all part of the job. That’s all a part of lawyering. Being able to pivot and adapt is a fundamental skill necessary for all lawyers.”

Through it all, however, Darren said that work ethic, building strong personal and professional networks, and being open to experiences that will help you grow are all great ways to propel your career forward.

“You don’t have to have a perfect plan,” he said. “I know, as lawyers, we’re all ‘Type A’ people who feel we need to have a path and a plan, but sometimes you don’t need to be so focused on that. The more important thing is whether you can adapt, go with the flow, and take a job that will give you experience to get you to the next level. You have to let yourself be free to explore options.”

Darren’s hard work and open mind have certainly provided him just that: experience that has helped him arrive at the next level. Now a partner (as of January 2017) in the very firm where he got his start—in addition to being named to the Legal 500 list, the Super Lawyers Magazine’s “Upstate New York Rising Stars” for four years, and one of The Daily Record’s “2014 Up & Coming Attorneys”—Darren’s career is an exciting one.

Beyond the recognitions, the new partner position, and the more than ten years in the business, Darren said he loves that a profession like the law also allows him to give back and be a part of something bigger than himself.

“I’ve been a part of a number of great projects as a real estate and construction attorney,” he said. “I help build breweries, museums, shops, and apartment buildings, all of which are important in their own right. But, I’ve also been able to work on some great projects that do so much good for people really in need.

“When I started ten years ago, for example, we started working with a service provider to build a safe space for domestic violence victims. There were a lot of twists and turns along the way, but finally, last year, the building was completed. It was a thrill to attend the grand opening of a building that is a tangible representation of my career to date and, more importantly, fills such an important need for the community it serves. I received a great deal of personal satisfaction from working on that project in particular.”

From ‘happenstance’ to ‘making it happen,’ Darren continues to shine in his field and excel in his craft. We’re certainly excited to see where he goes next!

This story was written by Legal Pulse Editor Samantha Pallini and is the sixth installment of Syracuse Law Review’s new monthly feature, “Alum of the Month.” Stay tuned for next month’s feature on another noteworthy Syracuse Law Review alumnus.