Growing up in Utica, Bernadette or Bernie, as she is known, loved her community. She had so much support and a loving family and knew eventually she wanted to give back to the community that raised her. Bernadette went to 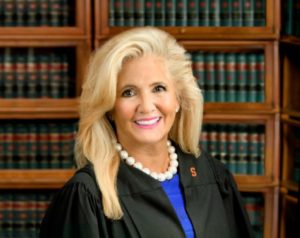 Although she planned on attending law school, after graduation from St. Mary’s, Bernie ended up working for 12 years back in Utica at a pharmaceutical company in the sales and marketing department. Bernie enjoyed the opportunities and experiences in her new position especially traveling across the country and the challenges associated with the art of persuasion and sales.

Then in 1984, Bernie’s brother graduated from the Syracuse College of Law. As soon as her brother’s graduation ceremony was over, Bernie wasted no time and immediately started her law school application process. Though she took some time off, her love for the law never waned. Since she was already married and living back home in Utica, Bernie applied to Syracuse College of Law.

Being out of school for 12 years made the transition into law school a little difficult. Instead of letting the difficulty get the best of her, Bernie decided to embrace all law school had to offer. She knew going into law school she wanted to make a difference and was very determined to accomplish her goals. Bernie joined as many organizations and clubs as she could from trial and appellate teams to Law Review. She even went on to be the Student Senate President and a member of Justinian Honorary Law Society during her 3L year.

The Law Review and trial and appellate teams really helped Bernie shape her career. As a “write on” to the Law Review, Bernie was able to truly hone in on her legal writing skills and ended up having her Note, Is the New Standard for the Fourth Amendment Particularity Requirement in Obscenity Cases “I know It when I Seize It”?, published in Volume 39. When elected Technical Editor for the New York Survey, Bernie was also able to improve her legal citation skills.

Bernie also took advantage of the advocacy programs and enhanced her legal argument skills by being on both a trial and appellate team. Bernie wanted the full law school experience in order to embrace and learn as much as she could to truly prepare herself for the legal work force.

In 1994, the District Attorney of Oneida County offered her the position as First Assistant District Attorney. Although she hesitated initially, since she had never practiced in the criminal law field, Bernie accepted the position when she learned she would be the first woman ever to hold that office. Being a prosecutor became Bernie’s passion. She loved to help people and see the tangible results that made a difference in the lives of so many in her community. Her time as a prosecutor really sparked her interest in running for a judicial position.

When a seat opened up in Family Court, Bernie started her campaign and became the first elected female judge for Oneida County in November 2000. Especially as mother, Bernie took her work home with her every night. She felt the hardships and was shocked to learn about the tragedies that children were facing in her home county. Bernie spent five years as a Family Court Judge, and it was the “toughest job she ever loved.” Those with political power in Oneida County were not convinced a women should be a judge. When a seat opened up in the Supreme Court for the Fifth Judicial District, Bernie decided to run, Bernie was not deterred, she wanted to open the doors and show women that they were qualified for these positions and should not be afraid to run. As a female judicial candidate for the highest trial court in the state, Bernie faced a lot of backlash and comments. Questions were asked about her hair, makeup, and clothes. This did not discourage Bernie, it only motivated her to continue to push forward. Using her experiences from law school and speaking about her achievements, in November 2005, Bernie became the first female judge for the Fifth Judicial District of New York. Bernie’s election opened the door and inspired more women to run for judicial positions and there are currently two other female judges in Oneida County.

Being a Supreme Court Justice is no easy task. She hears a variety of cases from medical malpractice, contract disputes, property issues, election law cases, serious accident claims, and many more. Having to make split second decisions throughout the trial regarding evidentiary issues or jury charges has its difficulties but Bernie enjoys the challenge. She loves the excitement of the trials and writing her well-thought decisions. In 2006, Bernie established the Oneida County Domestic Violence Court which she presided over until 2009. Her term as a Supreme Court Justice will be ending in December of this year but Bernie is planning to seek another term.

If you ask Bernie what her favorite part of law school was, the answers will be endless. Her time at Syracuse prepared her fully for the legal world and gave her all the tools she needed. Law Review gave her close friends that she still keeps in touch with. She has had a variety of legal experiences from working in firms to being a Supreme Court Justice, all thanks to her beloved Syracuse College of Law. The collegial atmosphere, the professor’s open-door policies, and the rigorous training at the law school helped shape Bernie to be the successful woman she is today. Her advice for students? Take advantage of all the opportunities the school has to offer, enhance not just one set of skills, enhance them all.

This story was written by Alumni Editor Stefani Joslin and is the fifteenth installment of Syracuse Law Review’s new monthly feature, “Alum of the Month.’ Stay tuned for next month’s feature on another noteworthy Syracuse Law Review alumnus.