It was 9 o’clock in the morning, and demolition on the old football stadium had begun just a few feet away from the Law School. The site would become the Carrier Dome. First-year law student, Jean Macchiaroli was sitting in Torts, and Professor Peter Bell was sitting cross-legged on the desk, giving the class a hypothetical to discuss. She was taking it all in that morning, but little did she know just how much this class would impact her career in the legal profession. As a student who was previously ready to pursue a career in art history, Jean found herself instead in the 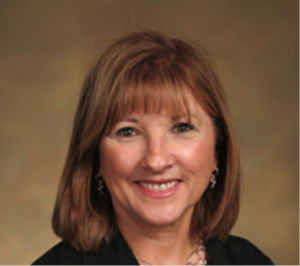 world of torts and civil procedure.

After receiving her bachelor’s degree in French literature from Connecticut College, Jean received her M.A. in art history from Michigan State University. She ended up developing a love for art history and was ready to dive deeper into that world, so she set off as a Ph.D. candidate at the University of Michigan, focusing on the iconography of 15th Century Northern Renaissance painting. At both Michigan and Michigan State, she held positions as a teaching assistant – lecturing, leading discussion sections, and writing and grading exams. While working on her Ph.D. dissertation, she found herself wanting to do something current that would “change people’s lives.” While considering law school, Jean traveled once to visit a friend at Syracuse Law – another former Michigan art history Ph.D. student. She was pleasantly surprised by the welcoming and diverse campus. She noted that the students ranged in age, race, and gender, and it was then that she knew Syracuse Law was where she wanted to be. Soon, Jean was packing her bags and headed for New York to pursue a career in the law.

When entering Syracuse Law, Jean knew that her academic background would make her a good fit for the Law Review. She loved being a part of this organization and working with her fellow members, particularly Managing Editor and sidekick Steve Shaw. Jean ended up taking her love of the Law Review to become the Editor in Chief of Volume 33. Her Law Review note on criminal procedure and evidence was selected for publication. Amidst her work on Law Review, Jean also participated in the Moot Court Society’s annual Lionel O. Grossman Trial Competition. Despite being a 2L, who had not yet taken the Evidence course, Jean and her partner were determined to “soldier on.” With dreams of one day becoming a trial attorney, and the will to win, the 2L duo made it all the way to the finals, before placing runner-up.

Grossman was only the beginning for Jean. One of her favorite classes was Trial Practice with Professor Travis Lewin. Jean loved the controversial cases and the sensitive topics that Professor Lewin chose, mostly dealing with Criminal Law and product liability. She appreciated his broad focus on all aspects of litigation, not just the trial itself. She remembers practicing a particularly challenging voir dire with undergrad students as the jurors. Jean used her experience from this class to pursue her interest in becoming a trial attorney. After graduating magna cum lade, Jean went on to work in the litigation department at Bond, Schoeneck, & King, PLLC in Syracuse.

Jean’s role as Editor in Chief gave her the confidence level and writing skills needed for the legal profession. She recalls a judge ruling against her on a summary judgment motion, but taking time in open court to compliment her on the excellence of her brief. She remembers thinking that maybe that judge would give her brief extra attention in the next case and be persuaded by her argument. Eventually, Jean’s professional goals shifted, however. She longed to reach a larger group of people through teaching and scholarly writing. She had loved law school and the exchange of ideas in a dynamic environment. Becoming a law professor was the next logical step; her job search resulted in being hired by Delaware Law School.

Jean’s arrival at Delaware Law School brought some significant challenges. She taught her first class as a law professor while seven months pregnant and became the first professor at the law school to give birth during the academic year. There was no precedent, and she was on her own to manage her classes and her writing and service responsibilities. Although much has changed since then, some of the old attitudes have remained in the profession, as her former students have reported. For women entering the legal profession, she emphasizes “the need for strong support systems, both inside and outside the workplace. Trusted mentors and sponsors – female or male – can help navigate any choppy professional waters.”

In her first year of teaching, Jean taught Civil Procedure and Environmental Law. The next year she developed a new course, a Toxic Torts course. The field was brand new, with no casebooks, so she put together a large set of reading materials for the students. She also reached out to Professor Bell for advisement; she says he was very generous with the materials he had on the subject. But toxic torts was a new, up-and-coming educational topic, one that was taught at few law schools in the nation at the time, so there was little to build upon. Jean says that, upon developing the course, there were very few decisions that related to toxic torts in her first years of teaching. The groundwater pollution case that inspired both the book and movie, A Civil Action, had recently settled during trial, but unfortunately was under a “gag agreement” at the time. Consequently, Jean had her students read the few briefs and decisions available, most having to deal with “Agent Orange.” The experience of developing the reading materials was galvanizing, and Jean felt that she knew every aspect of the subject after researching the new cases each year. Over time, toxic torts would become a major subject of litigation, with an explosion of judicial decisions, and a key subject of legal education around the country.

Jean’s scholarly writings demonstrate her expertise and interest in a broad diversity of topics. Some of her scholarly pieces have been on such subjects as neuroscience and tort law, mass torts, scientific evidence, nanotechnology, federal preemption in product liability actions, reproductive and genetic hazards in the workplace, toxic torts at Ground Zero, and various procedural issues in medical malpractice and toxic tort litigation. Her book, West’s Toxic Torts in a Nutshell, has a 6th edition being released in October. While Jean served as one of the trailblazers who helped to create a path for legal curriculum in the field of toxic torts, Jean also taught a variety of other classes. In 2002, she began teaching first-year Torts, and has also taught upper-level Civil Procedure, Environmental Law, Tobacco and the Law, Science and the Law, and New York Civil Practice. Jean’s law school service included five years as chair of the Tenure Committee, membership on the elected Faculty Executive Committee, and membership on the Strategic Planning Committee. And yes, she spent several years as advisor to the law review.

Jean continues to highly value the arts as important to our culture and our humanity, and moving on from art history did not diminish her interest or participation in the arts. She has had a long affiliation with the Wilmington Drama League, a community theater, where she served on the board and as VP of Artistic Development. In addition, she has directed several mainstage productions at WDL, as well as plays in the one-act play festival. She writes plays, and one of her original plays won the WDL one-act festival.

Recently, Jean retired from Delaware Law School (now officially Widener University Delaware Law School) and is now a Distinguished Emerita Professor. In what proved to be a storied career, Jean was a two-time recipient of the Douglas E. Ray Excellence in Faculty Scholarship Award and received a writing award from the ABA Section of Environment, Energy, and Resources. She is still engaged in scholarly writing and consulting.

Looking back, Jean says one of the most rewarding experiences she had as a professor was seeing her students “go out and shine.” Just as she formed a bond with her former professor, Peter Bell, Jean says she loves when her former students reach out to her and fill her in on their progress. She says, “Teaching allows us to touch the future, and I can think of nothing more satisfying and inspiring than seeing my law students succeed in the legal profession and pass along their knowledge to the next generation.”