Edward Bibko was born and raised in Phoenix, New York, a tiny village with just over 2,000 people. He had his sights set on getting out but didn’t know yet what the world had to offer. He never imagined that he would become European general counsel at a global investment banking firm in London, England. 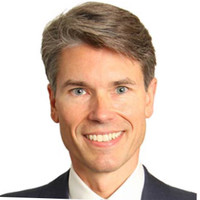 It all began with his brother’s pursuit of engineering. “I thought, ‘I could do that!’” he said. But after some time studying engineering, Edward decided he wasn’t too intrigued by the science. So, he changed majors and graduated from the University of Vermont in 1989 with a degree in Finance.

Following graduation, he began working for IBM as a financial analyst. IBM offered Edward an exciting opportunity and a great start in his professional career, so he spent over a year there. But again, Edward decided he really didn’t like numbers in general. Having eliminated two professions, he thought about law. He didn’t really know what lawyers did, apart from what he’d seen on TV shows of lawyers. Nevertheless, Edward was ready to find out for himself what it was really like and how he could make his own impact. So, in 1991, Edward set off to begin law school at Syracuse University College of Law.

He was invited to become a member of Syracuse Law Review Volume 43 and was thereafter elected by his peers as the Managing Editor of Volume 44.

“[Law school has] so many amazing, intelligent people, and to have the support of your peers and to be elected to [Managing Editor] was a tremendous confidence boost,” he said. “I think that inspired me to set my sights a bit higher.”

Edward was a commuting student, and busy with Law Review work, but he took advantage of the opportunities available to him. He recalls participating in the ‘Lawyers in the Classroom’ program, where he’d visit inner-city high schools and talk about the law, trying to make it interesting for 15 to 18-year-olds by teaching cases with “wild fact patterns.” He also spent all of his first summer and part of his second summer at the New York State Attorney General’s Office, where he got to be a hands-on participant in a variety of cases.

Likely the most impactful experience of his law school career, however, was the consequence of reading an ad that led to a trip to Cambridge, England.

“In between my second and third years of law school, a good friend and I were just waiting for a class to start and leafing through one of the legal magazines,” he said. “There was an ad on the back of it that said, ‘Study in England . . . because everyone should have at least one great time in law school.’ Convinced, we went to Cambridge, and that’s actually where I met my wife, who is from Chicago, at the Spread Eagle Pub. It was a tremendous time, really studying European law and also the history of law. So, when I came back, there were two consequences from that: I ended up marrying my now wife, [and] it made me think maybe I wanted to do something international.”

The trip to England was the start to an exciting career ahead for Edward, but he didn’t head to London just yet. He first began his legal career, upon graduation in 1994, in New York City, where he worked as a litigator at the firm of a Syracuse alumnus. While there, the prospect of one day living in England remained prevalent, so Edward kept his options open.

“I found some used books and studied for the British Bar,” he said, “and I took that in 1997 while I was in New York. Then, when my wife said she couldn’t quite get used to New York, we moved to Chicago.”

Upon the move to Chicago, Edward found an attorney position with Sam Zell, former owner of the Chicago Cubs professional baseball team. Zell had “his own law firm with 45 lawyers” that focused solely on his legal needs, and Edward was one of them. After a couple of years, however, a new opportunity arose.

“[Zell] decided to wind up [his law firm] because he saw the ‘dot com’ bust coming,” Edward said. “So, that’s when I moved over to Kirkland and Ellis. I said to them, ‘I’ll join you, if you consider moving me to London at some point.’”

And so, the move to London became another step closer and became more real as the international legal work piled up. Through Kirkland, Edward worked with many Japanese clients, hosting conference calls at 2 a.m. to make up for the time difference and working with a wide variety of legal principles. Then, another opportunity sprung up.

“A former Kirkland [attorney], who had moved earlier to Baker & McKenzie was partner,” he said, “and she hired me [to Baker]. That was the bridge between the two.”

At Baker, Edward quickly rose from senior associate to partner, and eventually became the head of Baker’s Capital Markets Group with Europe, the Middle East, and Africa (“EMEA”). The best part? He and his wife had finally struck a deal and moved to London.

While at Baker, Edward worked on many initial public offerings, with most of the deals done by listing foreign companies on the London Stock Exchange.

“The biggest work flow or work task is to prepare a prospectus for investors that describes everything about the company and the securities,” he said. “In order to kick off that process, you typically would go off to that company and spend a few days with them to see what they do so that you can write about it[.]”

These trips to visit the companies led to a multitude of ‘movie moment’ adventures, from driving across the Saudi desert, to working from an island in the Maldives, to encountering traveling camels in Uzbekistan. He said this made for an exciting career, as each “deal was like a little master class in that company’s business.” One of his more interesting adventures took him to Russia.

“I worked for the Russian Diamond Mining Company, and so I went by private plane to just south of the Arctic Circle to an uninhabited region of Russia to this diamond mine,” he said. “I went and dug up diamonds for a couple of days and lined up at the equipment cage with all the other minors.”

After 17 very successful years with Baker, one of Baker’s clients – Jeffries – came knocking. As a young, evolving global investment bank, Jeffries has grown to become one of the top 10 investment firms – joining the ranks of Goldman Sachs, Citi, J.P. Morgan, and the like – according to Edward (and a December 2017 Business Insider article).

He chose to transition from his capital markets position with Baker into Jeffries’ in-house counsel role after wanting a change. “I was excited about the opportunity,” he said, “but I had also sort of been in-house early in my career, and I knew it was a fantastic dynamic[.] There’s a relationship where you are part of a team[.]”

Edward has been serving as Head of the IB Legal at Jeffries since his 2017 move and recently received a new title in just the last few months: Acting General Counsel for EMEA and Asia. He said he loves this new role, and he looks forward to all that comes next.

As to advice for students planning out moves to one day follow in his footsteps, Edward laughs and simply remarks, “Don’t sweat it.”

“If my career stands for anything,” he said, “it’s that you can make every mistake possible and you’ll still end up where you’re meant to be. I was, I suppose, a disaster in terms of planning. I didn’t know what lawyers did when I went in to law school. I didn’t really focus on any one area of law in particular in law school. I had only vague notions of what I was supposed to be doing. I didn’t do a summer associate program. I didn’t do the paralegal route. Essentially, I had done everything wrong, but you just find your way.”

“Relax, and know it’s a long career ahead of you. If anything, we’re in a world where flexibility is probably the most important thing these days. And so, I think that my advice would be…at the end of the day, don’t sweat it. If you just apply yourself and continue on, you’ll find where you’re supposed to be.”

This story was written by outgoing Legal Pulse Editor Samantha Pallini and incoming Alumni Editor Kristina Cervi. It is the ninth installment of Syracuse Law Review’s monthly feature, “Alum of the Month.” Stay tuned for next month’s feature on another noteworthy Syracuse Law Review alumnus!