—by Adam Kuhn
Special thanks to Mary Ellen Gill for her assistance with this article.

Abstract: The New York Court of Appeals expanded the definition of “parent” to include a non-biological, non-adoptive partner. The court overruled a 1991 case that defined “parent” as a biological parent or adoptive relative.

The NY Court of Appeals cited 2006 College of Law alumnae Mary Ellen Gill’s Syracuse Law Review Note in Brooke S.B. v. Elizabeth A. C.C. The court held in its August 30th decision that “where a partner shows by clear and convincing evidence that the parties agreed to conceive a child and to raise the child together, the non-biological, non-adoptive partner has standing to seek visitation and custody” under NY Domestic Relations Law Section 70(a).

At issue was the vitality of Alison D. v. Virginia M., 572 N.E.2d 27 (N.Y. 1991), where the Court of Appeals defined “parent” as a biological parent or adoptive parent. This meant that a person who did not fit this relationship to a child had no standing to seek visitation. The issue affected all manners of family relationships, with implications for not only same-sex partners, but also all functional parents who took on care of a child from a different relationship than a biological parent, sibling, or grandparent. However, this issue has now been resolved, as Brooke S.B. has overruled the strict definition that was created by Alison D., and allowed non-biological, non-adoptive partners to have standing to seek visitation.

In the majority opinion, Judge Abdus-Salaam noted that “legal commentators have taken issue with Alison D. for its negative impact on children,” citing Ms. Gill’s Note, among others, for the proposition that “children suffer [trauma] as a result of separation from a primary attachment figure—such as a de facto parent—regardless of that figure’s biological or adoptive ties to the children.” 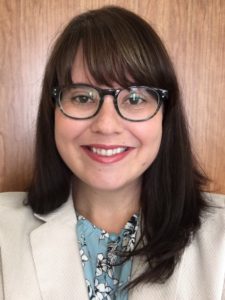 Ms. Gill’s Note, titled Third Party Visitation in New York: Why the Current Standing Statute Is Failing Our Families, was published in Volume 56 of the Syracuse Law Review. The Note discussed NY Domestic Relations Law Section 70(a), which provides that only a parent (or sibling or grandparent) can petition for visitation with a child. The Note suggested an amendment to the statute based on a factor test.

Ms. Gill, who currently works as a Pro Se Law Clerk to the Hon. Michael A. Telesca in the U.S. District Court for the Western District of New York, said she was excited and proud to have her Note cited by New York’s highest court.