Damien Elefante’s path to success has had him traverse thousands of miles, dive into the private and public sectors, and, ultimately, settle down into an area of law he never predicted but greatly enjoys. 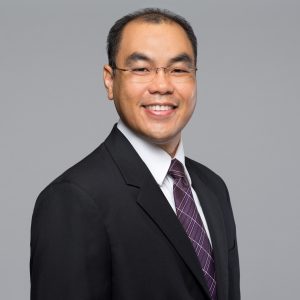 In his senior year of college at the University of Hawaii, Damien was a legislative intern for a state senator.  He witnessed the legislative process and the politics involved in establishing laws for the State of Hawaii.  It was while working at the legislature that Damien was given advice from a legislator about post-graduate opportunities and the suggestion that he take the LSAT.

Before Damien knew it, he was submitting applications to law schools across the United States and juggling acceptance letters.  Ultimately choosing Syracuse University College of Law for the Technology Commercialization Law Studies curricular program and school status, Damien was ready to rid of his “island fever” and embark upon a new adventure in upstate New York.

Entering law school, Damien wasn’t quite sure what he wanted to practice.  He certainly was interested in the technology and management program, but he remained open to the possibilities of trying out a variety of electives and working with one of the clinics.

Moreover, Damien joined Syracuse Law Review, editing with the staff of Volume 48 and serving as Computer Editor of Volume 49.  Simultaneously, he served as an Associate Editor for the Syracuse Journal of Legislation of Policy.

Upon graduation, Damien went to clerk for Chief Judge James S. Burns of the Hawaii Intermediate Court of Appeals for 16 months.  He recalls that “the clerkship was by far the best job he’s had after passing the bar exam!” Damien’s sole responsibility as an appellate law clerk was to write memoranda based on the briefs and arguments that were presented in all types of civil and criminal cases.  This experience exposed him to the process and procedures involved in litigation that formed the foundation for his litigation career.

He began his litigation experience  at Hisaka Stone Goto Yoshida Cosgrove & Ching, working as an associate attorney for a year, until he accepted an offer to be a Deputy Attorney General for Hawaii.

He served as a Deputy Attorney General for almost 14 years, representing the Department of Taxation (DoTAX) in all legal matters, until he found himself on a path to his current position, purely by chance.

“It was during my twelfth year, while I was deciding whether I should stay with the Attorney General’s office or change,” he said. “I decided to apply for various positions, one of which was the Compliance Coordinator for DoTAX.”

Like traveling from Hawaii to Syracuse, or jumping from private to public sector, Damien took on the next adventure from being an attorney to being an administrator.  He performed the job of Compliance Coordinator for DoTAX with enthusiasm and a passion for excellence. Little did he know, others had noticed.

“Six months in, the Deputy Director at the time decided to leave,” he said. “I guess during my six-month tenure, the Director was so impressed with my performance that she asked if I would consider being Deputy Director.  I agreed to be a candidate for the position, and then interviewed with the Governor[.]”

In 2016, Damien was confirmed by the legislature as the Deputy Director of DoTAX for the Hawaii State Government. Today, Damien spends his time managing DoTAX’s administrative and operational activities to enforce the tax laws of the state and implement DoTAX’s mission to “fairly administer the tax laws of the state and hold accountable those who do not pay for their fair share of taxes.”

So, what advice does Damien have for students?

Second, realistically prepare for life after law school.  Take classes that will prepare you as much possible for the type of area you want to pursue as a career.  Further, think about more than just resolving cases in front of a judge or jury.

“The most significant cases that have left an impression [on me] are the cases where I was able to negotiate some type of settlement,” he said.  “Thinking back, the same amount of ‘effort’ and motivation is required to settle as  litigating a case in court.”

This story was written by Legal Pulse Editor Samantha Pallini and is the fifth installment of Syracuse Law Review’s new monthly feature, “Alum of the Month.” Stay tuned for next month’s feature on another noteworthy Syracuse Law Review alumnus.