When a new class of associates joins Latham & Watkins in Boston, they’re always treated to a ‘pep talk’ by one of the founding partners of the Boston office: Phil Rossetti. Phil tells them about the importance of paying attention to detail, treating others with respect, and putting in the work. While all of this sounds rather obvious, Phil says that the most pragmatic and obvious of tasks are what make all the difference between a good lawyer and a great lawyer. 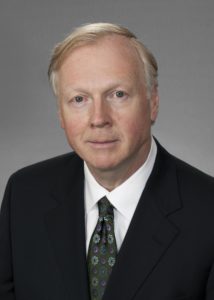 Phil grew up just a few miles outside of Syracuse, New York, in the Town of Marcellus. He studied economics at the University of Rochester but then returned to Syracuse for law school, having always loved Syracuse University. He recalls how he and his high school friends would go to Marshall Street to browse the records at the local record store, or how they would  sit on the floor of Manley Field House to watch the Orangemen play basketball.  It was only natural that Phil chose Syracuse University College of Law to get his juris doctor.

In 1978, he began his 1L year. Phil had always loved business, and he realized that he wanted to be a part of corporate law and the immense possibilities that came with it. So, he started taking classes and internships that would prepare him for that career.

One of those legal internships, held during his 2L summer, was working as an associate for Bond, Schoeneck & King in downtown Syracuse. As for activities, Phil was very involved in the Syracuse Law Review, where he served as Editor-in-Chief during his 3L year. He recalls working in E.I. White Hall, where the members would gather together in their little office to read page proofs and work on the quickly-growing issue, the Survey of New York Law, now the cornerstone publication of the Syracuse Law Review.

Phil enjoyed being involved in these academic endeavors because he felt that law school made him feel as though he was “studying something he could really use and implement in his career and profession going forward.” Some of his favorite professors – Ted Hagelin, Richard Goldsmith, and Peter Bell – taught him to understand the legal principles while fitting them into a larger context, which he found particularly helpful. He even remembers going home for Thanksgiving his first year and telling his parents, “Don’t tell anyone, but I actually really like law school!”

Following law school, Phil accepted a position in Boston at the firm of Hutchins & Wheeler. He knew that New York City was a hot spot for many of his colleagues, but he felt that Boston offered a sophisticated legal practice in a manageable and livable city.

“Corporate law and business have always been strong dynamics in Boston, particularly in the ‘80s and ‘90s when the economy was very strong,” he said. “The market was also strong for lawyers in Boston. I think the great part, though, was that the educational institutions and culture of Boston generated a tremendous number of technology companies and startups. That’s where I wanted to be.”

Following his time with Hutchins & Wheeler, Phil moved over to Hale and Dorr, which years later merged with Wilmer, Cutler & Pickering to become WilmerHale. For nearly three decades Phil worked at WilmerHale, where he worked on mergers and acquisitions, IPOs, tech company startups, and more. He loved the work, he loved Boston, and he was about to be presented with a new and exciting opportunity: to become a founding partner of a new office.

In 2011, Phil and five other attorneys opened the Boston office of Latham & Watkins, with Phil serving as the office managing partner for the first four years. Today, Phil continues to work in corporate and securities law with an emphasis on mergers and acquisitions, emerging companies, and venture capital financings.

“I really enjoy being able to counsel companies and to help them grow,” he said. “I pride myself on being able to give good business advice in addition to legal advice.  I have seen so many situations over the years and have come to love the life cycle of a company . . . I have lived that life cycle so many times that I can anticipate issues and help position a client for the best outcome.”

“People rely on lawyers to anticipate all of the things that can happen,” he said. “So, when we’re negotiating contracts or transactions, we need to anticipate what can happen, even if there’s only a 1% chance of happening. If it could, it will, so plan for it.”

It is this type of thinking and experience that has led Phil to be named a leader in Corporate Law and M&A for the last three consecutive years by Chambers USA and to be recommended by The Legal 500 U.S. of 2012.

Today, Phil finds himself offering advice and counsel to more than just clients; he does so for Latham’s new associates and summer associates in the Boston office.

“When I was just starting out, I would travel with a senior partner,” he said. “It was my job to make sure the car was there to pick us up, plane reservations and dinner reservations were set, and that we had directions to the right locations at the right time. It may sound silly and trivial, but planning, paying attention to detail, and taking initiative: that’s what helps you get ahead.  It is important that young lawyers show initiative in everything they do, and don’t wait for someone to figure it out for them.  Practical instincts and attention to detail are what set you apart from everybody else.”

Whether it’s advising a client, or giving a pep talk to a summer associate, Phil has set the bar high, not only for those around him, but for the legal profession.

Syracuse Law Review looks forward to recognizing Phil and his many accomplishments at the Law Review Banquet on April 12, 2018.

This story was written by Legal Pulse Editor Samantha Pallini and is the eighth installment of Syracuse Law Review’s monthly feature, “Alum of the Month.” Stay tuned for next month’s feature on another noteworthy Syracuse Law Review alumnus!