From an early age, Kenneth Irvin knew he had a calling for a career in the law. His mother worked as a secretary in a law firm, and he became friends with the lawyers at the firm.  Ken was intrigued by the world of law and used his passion to become the successful lawyer he is today. 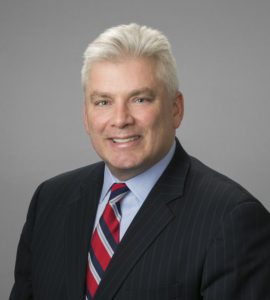 As an engineer major, Ken was never afraid of a challenge. After graduating from Clarkson University, Ken worked for three years as sale engineer for Weidmuller, a company in Richmond, Virginia that manufactures and sells electrical connectors and terminal blocks for industrial applications and controls. Though Ken enjoyed the work he was doing, something was missing; he wanted to do something more rewarding and enriching. As an inquisitive child who often asked ‘why,’ Ken was counseled by many to pursue a career in law. With this advice in mind, Ken found himself applying to law school and drawn to the reputation of Syracuse. Two of the lawyers at his mother’s law office were Syracuse alumni who had nothing but praise for the school.  Ken soon packed his bags and headed to Syracuse.

Given his undergraduate degree in engineering, many folks thought Ken pursued a law degree to enter the field of patent law. From his days as a sales engineer, however, Ken found a love for presenting a case and persuading others- hence the courtroom beckoned and Ken aimed to be a commercial litigator. Ken really enjoyed Civil Procedure, Evidence, Trial Practice, and all the classes that dealt with being inside a courtroom. Ken participated in two trial competitions on environmental law as well.

Though he had a love for the excitement of a courtroom, Ken also found a calling to serve on the Law Review. As the Technical Editor, Ken was in charge of making sure the citations were proper and confirmed with the Bluebook standards. The best part to Ken for serving on the Law Review was the collaborative spirit of the organization.

Ken truly enjoyed his time at Syracuse, and he’s grateful for all the professors he came to know.  Several professors offered personal guidance about how to navigate law school and launch a career successfully. One professor in particular, Professor Richard Goldsmith, became an outstanding mentor. “Spike” as Professor Goldsmith was nicknamed had a razor-sharp wit and way of teaching that was loud and enthusiastic. The ‘tough nuggies’ rule was a favorite of Professor Goldsmith, who passed away in 2008. Ken enjoyed him as a professor and even went on to be his research assistant. When graduation came, Ken went on to pursue a legal career in litigation.

Graduating in 1992, for the next eight to ten years, Kenneth practiced predominantly in litigation. Initially, Ken worked for the same firm as his mom, and that role helped as outside counsel for the City of Rome, NY. One case in particular he remembers fondly was one that involved a mule getting lose and being hit by a car, which injured the driver. Ken helped the City successfully defend itself from liability by showing that NY law applied the “every dog gets one free bite” to mules that “jump a paddock fence.”

In 1993, Kenneth made his way from New York to Washington D.C. He worked at a small firm at first through Syracuse Law alumni connections, and then went to Morrison & Foerster LLP as a lateral associate. Ascending to partner in 2000, Ken saw his practice evolve from a litigation focus to a transactional and regulatory focus in the energy industry. In 2005, Ken joined the energy practice group at McDermott Will & Emery LLP.  His work for energy clients then lead him to Cadwalader Wickersham & Taft LLP in 2011, and then to Sidley Austin LLP in 2015, where he practices today.

Through his litigation experience, Ken was exposed to the word of telecommunications and energy. Ken became extremely interested in energy law and made a transition from just helping people in court to actually creating transactions. The idea that people use electricity every day and do not always think about how it works fascinated Ken. Now, he is a partner at Sidley in D.C. working on the things he loves. The work Ken does now is helping with reliable, affordable energy, and global climate change by helping to foster the role for renewable energy. Though the work could take years, supplying our needs for electrical energy through renewable sources is attainable goal. With that in mind, Ken and his practice team work to help make renewable energy affordable for everyone.

Ken truly enjoys the work he does now and loves being a part of something that helps make lives for everyone better. Ken’s experience in law school helped shape him to the hard working lawyer he is today. Syracuse pushed him and made him realize that the legal world is about learning and really gaining knowledge on what you are learning.

One advice he gives to students is to go out there and try different careers. The point of finding what you love is to see what is out there first. As Abraham Lincoln said: “The best way to predict your future is to create it.” Find good mentors, and take value into grades and what you learn; hard work pays off and will land job opportunities.

This story was written by Alumni Editor Stefani Joslin and is the fourteenth installment of Syracuse Law Review’s new monthly feature, “Alum of the Month.’ Stay tuned for next month’s feature on another noteworthy Syracuse Law Review alumnus.