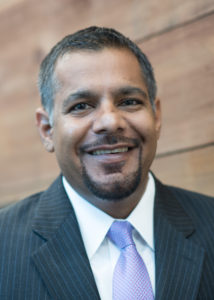 Michael Jordan’s father once told him that it was “never too late to do anything [he] wanted to do” and that Michael would “never know what [he] could accomplish until [he] tr[ied].” As simple a sentiment as that is, it seems that Raj Nichani has forged his own legal career in accordance with that same advice.

Raised in Daytona Beach, Florida, Raj loved living in the southern United States. He also admired his grandfather, a tax attorney, and his mother, a former student of the law. With his role models in mind, he decided he would pursue a legal career of his own.

He began his pursuit by graduating from Emory University in Atlanta, Georgia, with history and philosophy majors. From there, he went straight on to Syracuse University College of Law, his first of many moves where he would try something new to see what he could accomplish.

At Syracuse Law, Raj was a very active member of the student body, especially when it came to journals. Raj served as both the Managing Editor of the Syracuse Journal of Law and Technology and an editorial staff member of Syracuse Law Review.

“Law Review has had a significant impact on me,” he said. “One of the biggest things that I took away from Law Review was to be detail oriented and to make sure that whatever you write, even an email, is written properly.”

During his 2L summer, after working as a summer associate at Kelley Drye & Warren in New York City, he accepted a post-graduate job offer – another move to try something new to see what he could accomplish. The big move from his long-time home in the south, up to the bright lights of New York City was an adjustment, but he made the most of it over his several years as a litigation associate.

From there, he received an offer to return to Atlanta to work in securities law with Sutherland, Asbill & Brennan. After a few years at Sutherland, he then moved to securities law at Rogers & Hardin in Atlanta. But after several firms and several years, Raj came to a pivotal moment in his career.

“In 2005, after being at three great firms, I started to look at the clock every day and wonder when work was going to end,” he said. “At that point, you realize it is not because of the job but because of your lack of passion for what you are doing.  I decided to call my recruiter who placed me at Rogers & Hardin LLP and tell her that I’m leaving, and she told me to come in and speak with her.  I told her that I wanted to go back to Daytona Beach to sell T-Shirts with my parents, because if it was good enough for them, then it was good enough for me. I thought she was trying to sell me on another legal job, but I obliged her, and she literally gave me an offer I could not refuse: to help run her legal recruiting business – Hughes and Sloan.”

It was then that Raj realized it still wasn’t too late to try something new and see what he could, yet again, work to accomplish. So, he accepted the offer and began working as the Vice President of Legal Recruiting. Following Hughes & Sloan, he worked in legal recruiting for FirstPro, which “gave [him] some great experience for a little over a year and half.”

Raj quickly found that recruiting was his true passion, so much so, that he eventually opened his own legal recruiting agency in 2010: The RMN Agency. This “dream” that became a reality runs on the principle that recruiting and matching are about assessing the bigger picture: from work-life balance, to career goals, to the marrying of clients’ wants with employers’ needs.

So, how do you find your true calling in the legal profession? And how do you stay open to whatever that could be? Raj says there’s one simple answer.

So, just as MJ learned from his father, Raj came to find in his own journey that, simply because he pursued a career in private securities litigation for years, that did not mean he was locked in for life. He never knew what he could accomplish when he was just starting out as a litigation associate in New York City. Today, he runs an the award-winning legal recruiting agency in Atlanta.

“I was lucky to fall into an industry that I love and enjoy work daily,” he said, “and I hope that for others that have law degrees, whether it the traditional path or non-traditional path.”

This story was written by Legal Pulse Editor Samantha Pallini and is the seventh installment of Syracuse Law Review’s monthly feature, “Alum of the Month.” Stay tuned for next month’s feature on another noteworthy Syracuse Law Review alumnus!