Andy Bobrek followed a non-traditional path to law school, which started with a leap of faith motivated by a desire to live, work, and raise his family in Syracuse, New York.

Andy is a Central New Yorker through and through. Andy attended St. Lawrence University where he studied political science. After completing his undergraduate degree, Andy returned home to Syracuse and eventually worked as a staffer for Congressman Jim Walsh. Andy’s years working with Congressman Walsh were enjoyable and fulfilling, but his career path was eventually leading to Washington, DC, far away from his roots in Central New York and far away from his family and friends. Andy and his wife were committed to raising their family in Syracuse, which then led them to look at law school and a legal career as a potential means to stay in the area. 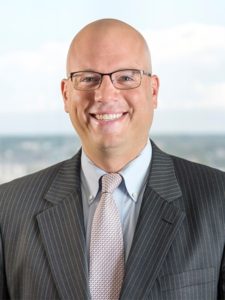 In this regard, Andy will tell you that attending SUCOL was ultimately a very practical decision. He will also tell you that it was a great decision for his family and for his professional career. Andy followed an incremental approach to the application process, first studying for and taking the LSAT and then applying to SUCOL (and only to SUCOL), with his ultimate goal being to land a job with an established firm in Syracuse. Andy continued working part-time jobs throughout law school, but, with two young children at the time, there was still plenty of motivation to keep studying and working hard.

During his legal studies, Andy also worked part-time at the Maxwell School, where he concurrently pursued a Master’s degree in Public Administration. Andy also assisted SUCOL’s legal writing faculty – particularly Ian Gallacher – as a research assistant. Although Andy stayed busy with his family, his studies, and his work, he still found the time to be a part of the Law Review. At first, Andy was hesitant about joining Law Review because of the time commitment and his other existing responsibilities. But Andy was nevertheless honored to be invited to join Law Review and ultimately knew this was an opportunity he could not refuse; he did not want to pass on the chance to be part of the prestigious Law Review team and to better hone his editing and legal writing skills.

Being a dual-degree student, Andy was only able to take a limited number of electives while fitting-in graduation requirements and bar-related classes. And yet one such elective – Labor Law – captured his interest and helped to ignite his desire to practice in the labor and employment law arena. During his 2L year, Andy applied for a summer clerkship with firms located in Syracuse and later received an offer from Bond, Shoeneck & King, PLLC, which he readily accepted. During Andy’s summer clerkship, he rotated through Bond’s different practice areas, including its well-known labor and employment practice.

Andy enjoyed immensely his summer at Bond and was beyond impressed with talent and skills of the firm’s attorneys and staff. He was also impressed with the highly sophisticated legal work being performed and with Bond’s amazing array of clients. Most importantly, Andy was struck by the friendship and support offered by Bond’s attorneys, who all showed a genuine interest in helping him to become a successful attorney. After that summer, Andy knew that labor and employment law was his calling and that Bond was the law firm for him. In turn, he gratefully accepted an offer to become an associate attorney at Bond, where he remains to this day.

Starting as an associate attorney after graduation, Andy felt comfortable working at Bond and attributes this comfort to his studies at SUCOL, which allowed him to build the necessary skills and partake in many helpful practical experiences. Andy’s practice today entails extensive amounts of legal writing, and he credits the skills he honed as part of Law Review, along with valuable guidance from Professor Gallacher, Professor Kathleen O’Connor, and Professor Louise Lantzy, as being a key to success.

Working at Bond, Andy has enjoyed a fulfilling and successful career and was honored when he was asked to become a partner. Andy will also tell you that his enjoyment working at Bond is due, in no small part, to the close and meaningful friendships he has established with colleagues and clients along the way.

Andy is a proud and active alumnus of Syracuse. He regularly works with law school students, coaching competition teams, meeting with admitted students, and judging the popular ADR competition, which he helped to found years ago. Andy has also lectured at the Maxwell School several times since graduating. These activities have also been professionally fulfilling, and Andy encourages all alumni to stay involved and to stay in touch with Syracuse as best they can.

What started as a leap of faith for Andy – uncertain of how he would manage a family, work, and school all at once – has turned into a successful legal career. By staying balanced and keeping his goals in mind, and with the help of his wife and his family, Andy has been able to stay close to his Central New York roots. And he remains deeply appreciative for everything he learned while attending SUCOL.

This story was written by Alumni Editor Stefani Joslin and is the seventeenth installment of Syracuse Law Review’s new monthly feature, “Alum of the Month.’ Stay tuned for next month’s feature on another noteworthy Syracuse Law Review alumnus.