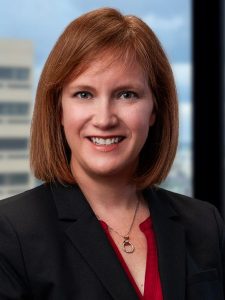 Kristen is a proud Syracuse native—she grew up in the nearby Tipperary Hill neighborhood, where she currently resides with her family. Although she has lived in Syracuse for most of her life, she did venture out and live in other places before ultimately settling down in Syracuse.

For her undergraduate studies, Kristen moved to Ithaca, New York to attend Cornell University’s School of Industrial Labor and Relations (ILR School), which is the “preeminent educational institution in the world focused on work, employment and labor.” As part of her course work, she took Labor Law and Employment Discrimination, both of which were her favorite courses. Her undergraduate education turned her onto the possibility of law school; however, she was not yet ready to attend law school. Instead, she moved to Chicago with her now husband, who is also a Cornell graduate. Kristen’s husband pursued podiatry school, and Kristen joined the workforce as a Technical Recruiter, which involved recruiting technology professionals.

After Kristen’s husband finished podiatry school, they moved to Massachusetts for two years, where he completed his residency training, and she continued working as a Technical Recruiter. When her husband was finishing his training and they were planning on moving back to Syracuse, she decided that it was a good time to go to law school. Kristen only applied to the Syracuse University College of Law (“SUCOL”).

Coming into law school, Kristen decided to keep an open mind. “I took classes in undergrad that showed me what the labor and employment law practice looks like, so I already knew I was interested,” she said. “For that reason, it was important to me to make sure I looked at everything else in law school. I didn’t want to box myself in without exploring my options.”

During her 1L year, she met impressive Bond attorneys through networking events with alumni, one of whom became her mentor. Through conversations with these attorneys, she considered working at a bigger law firm. This led her to apply to Bond’s Syracuse office her 1L year, which is where she ended up working as a Summer Law Clerk during both her 1L and 2L summers. At Bond, Kristen kept an open mind as she rotated through the firm’s four departments—litigation, labor and employment, business and property—before ultimately landing in the labor and employment law department.

Kristen graded onto Law Review and enjoyed the experience. Towards the end of her 2L year, she had to decide whether she wanted to coast through 3L year, given that she already had a job lined up with Bond, or whether she wanted to challenge herself by being the Editor-in-Chief of Law Review. After talking with the then current Editor-in-Chief about the role, she decided to take a chance and ran for the position, which she won.

Although it was essentially a full-time job in addition to a full course load, she greatly enjoyed being the Editor-in-Chief of Law Review and said she would “do it all again in a second.” She developed a strong network of friends, and further developed her leadership and editing skills. However, her 3L adventures did not end there.

During her final semester of law school, Kristen and her husband found out they were expecting their first child, who was born a month after she started working as an Associate at Bond. Kristen is the proud mother of four children and throughout her career, she was able to take advantage of flexible working arrangements thanks to Bond’s support.

After several years as an Associate and then a Member at Bond, Kristen watched as Syracuse elected its first independent Mayor, Ben Walsh. She was inspired by his vision and energy, and after his election, expressed interest in serving as the Corporation Counsel for his Administration. Kristen always had an interest in local government and thought this would be a way to use her legal skills to serve the City where she was raised and still lived. Kristen was appointed in March 2018. Kristen said that her experience as Editor-in-Chief allowed her to be better prepared for the Corporation Counsel position since she had to manage the operation of the Law Review. Similarly, as Corporation Counsel, she oversaw all of the legal affairs for the City of Syracuse and supervised around 30 individuals.

Kristen advised Mayor Walsh, the Common Council, and department heads on various legal issues, with an emphasis on employment and labor issues, such as labor contract interpretation and compliance, and workplace investigations. Additionally, during the pandemic, Kristen helped negotiate concessions with the city’s labor unions in order to avoid furloughs and to ensure the continuation of vital city services. She also worked on a number of police-reform initiatives through her time at City Hall, including the drafting and implementation of an Executive Order that directed the City’s police department to undertake additional reforms following the protests that followed George Floyd’s death. Having served during the height of the Covid-pandemic and the police reform movement, she reflects that she was fortunate to work in City Hall during a historically significant time and is proud that she was able to play a role in these projects. Overall, she greatly enjoyed her time working for the City of Syracuse.

Lastly, as advice for law students, Kristen said to treat law school like a professional occupation— “you have to put in the hours you would put into a full-time job plus additional hours.” She recommends getting to the law school in the morning, not wasting time during the day, and taking advantage of all the opportunities that are presented. Additionally, Kristen recommends connecting with SUCOL alumni who practice in an area one finds interesting, as many of these alumni would love to chat with students about their legal career and provide advice.